Re-enforcing his vision of accelerating economic development in India and emerging economies, Dr. Romesh Wadhwani, Founder and Chairman, Wadhwani Foundation today announced a commitment of USD 1 billion to Wadhwani Foundation. Silicon Valley based Dr. Wadhwani made this announcement via a video address at the SKILL INDIA launch campaign organized by Ministry of Skill Development and Entrepreneurship (MSDE) with Prime Minister Shri Narendra Modi as the Chief Guest. This event was held at Vigyan Bhavan today to mark the first ever World Youth Skills Day [15th July 2015].

Dr. Wadhwani’s increased commitment to the Foundation comes at the time when the focus of the Government on promoting skills development and entrepreneurship, and the long-standing mission of the Wadhwani Foundation to accelerate economic development through entrepreneurship and skills development seem to be fully aligned. Wadhwani Foundation’s two major ongoing initiatives – National Entrepreneurship Network (NEN) and Skills Development Network (SDN), have already had a significant impact on job creation and job fulfilment in India and now the Foundation is looking forward to partner with Government of India and state governments to further scale-up of its initiatives to help India create and fill 25 million jobs, in the organized sector, by 2020.

During his video address at the event, Dr. Romesh Wadhwani, Founder and Chairman, Wadhwani foundation said, “Entrepreneurship and skilling are the two magic keys to India’s economic and job growth. Recently, the honourable prime minister said that India has a large number of hands to work and even larger number of dreams to realise. So correct. I am grateful to the honourable Prime Minister Narendra Modi, to Minister Rudy, to other honourable ministers in the audience, to Secretary Sunil Arora and other dignitaries for their support on entrepreneurship and skills development in India.”

“India needs to create 25 million high quality jobs over the next few years. So I thought that the best mission for the Foundation will be to accelerate job creation through large-scale initiatives. For example, our National Entrepreneurship Network (NEN) and Skills Development Network (SDN) initiatives have already created 2000 new companies, tens of thousands of skill possessions, 500 colleges that now teach entrepreneurship and a 100,000 student entrepreneurs.” Dr. Wadhwani further added.

In Oct. 2014, when Dr. Wadhwani [along with a group of top Indian- American CEOs, venture capitalists and higher education leaders] met Prime Minister Modi in New York, he was extremely impressed by the Prime Minister’s resolve to people’s movement and found his commitment to job creation and skills development extremely encouraging to Wadhwani Foundation’s efforts of accelerating economic development by transforming education to create millions of jobs.

The core model of Wadhwani Foundation is to enter into private-public partnerships with Indian government and with state governments on entrepreneurship and skills education, developing new sources of capital, creating a mentor network etc. As a result, the Foundation has signed MoUs with the Ministry of Skill Development & Entrepreneurship (MSDE) for program management of specific projects relating to Skills Development and Entrepreneurship, and Department for Empowerment of Persons with Disabilities (DEPwD) [Ministry of Social Justice & Empowerment] to facilitate training and employment of 25,00,000 PwDs by 2022.

Given India’s demographic dividend, it acquires special significance. With 54% of our population below 25 years of age, India is sitting on a massive workforce – an unprecedented resource for wealth creation that has the potential to outpace much of the world and turn India into a global HR engine, if equipped with the right skills.

You can view the video address of Dr. Romesh Wadhwani here. 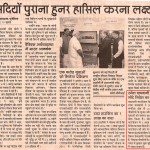 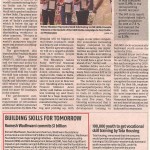 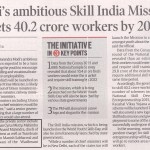 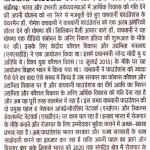 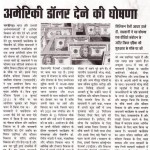 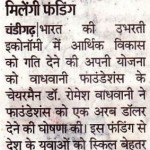